A 21-year-old woman never expected a rash would be a symptom of something as serious as cancer.

When a “few little bumps” that looked like “tiny pimples” first appeared on her shins and calves last May, Rhiannon Douglas of Staffordshire, UK thought it was razor burn — something her sensitive and eczema-prone skin had suffered before.

Then the raised spots spread up to her thighs and arms, which along with her feet and face, began to swell.

“It was extremely painful, to the point I was struggling to walk,” she told Global News. “I couldn’t do simple tasks easily, like walk up the stairs.”

“I just thought what on earth is going on inside my body?” 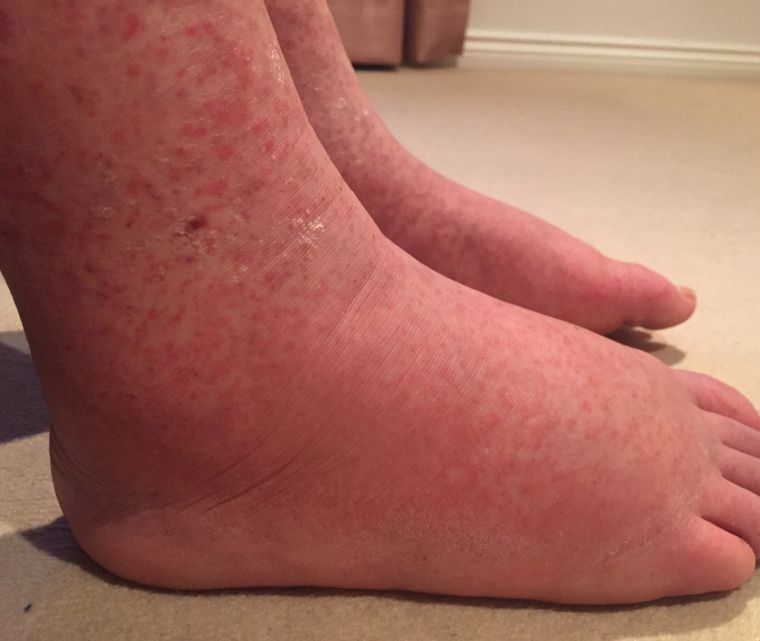 Her initial worry was that she might have meningitis, which can be linked to a rash.

When she went to the doctor’s office, Douglas says she was told to just take some Ibuprofen and that “it should go away itself in a couple of weeks.”

Six months passed before she was given a correct diagnosis. During that time, she saw more than half a dozen doctors. At first she was told it was Henoch-Schonlein purpura (HSP). The Mayo Clinic describes this as a “disorder that causes inflammation and bleeding in the small blood vessels in your skin, joints, intestines and kidneys.” Its most “striking feature… is a purplish rash.”

One doctor thought her rash was a sign of rheumatoid arthritis. The rheumatologist she was referred to thought it could be arthritis or a number of other conditions, including: HSP, Celiac, vasculitis (an inflammation of the blood vessels, according to the Mayo Clinic) and thalassemia (a blood disorder).

It wasn’t until mid-November, when she got a biopsy, that doctors finally figured out it was cancer. Nodular sclerosis lymphoma, to be exact, which is a type of Hodgkin’s lymphoma. It’s a cancer of the lymphatic system, which is part of the immune system, the Mayo Clinic says on its site. So if the disease progresses, it can compromise your body’s ability to fight infection.

“It sounds weird, but I was relieved,” Douglas said of the diagnosis. “It was the stress of months and months of the unknown that was getting me down. And then I finally knew.”

WATCH: Fred Cosman said he was misdiagnosed twice before a specialist finally discovered he had lymphoma

Douglas is sharing her story to encourage people to get second, third or even fourth opinions, if that’s what it takes.

“I don’t want anyone to have to suffer like I did and wait around for answers… I also want to show that cancer doesn’t have to change your life in a negative way.”

“I really, really want people to be positive as well and not put a death sentence on the word cancer. It’s not how it should be. We need to show cancer who is boss!”

Doctors told her the cancer she has “is the best type to have,” as it is easily treated.

Tom Kouroukis, an oncology professor at McMaster University,  agrees Hodgkin’s is usually “highly curable.” He says more than 80 per cent of cases can be successfully treated with chemotherapy.

The approach of Douglas’ doctors didn’t surprise John Kuruvilla, a cancer researcher at the Princess Margaret Cancer Centre in Toronto. He explains Douglas’ rash, which he saw in photos, “is a very unusual way” for Hodgkin’s to present itself.

“In general, rash is not the most common presentation for cancer in general,” he said.

The most common symptom a person with Hodgkin’s often notices, according to Kuruvilla,  is a lump. Most people with Hodgkin’s have swollen lymph nodes, Kouroukis adds.

Some patients may also experience fever, weight loss or night sweats. Douglas claims she didn’t experience any of those.

Kouroukis acknowledges rashes can sometimes be how lymphoma manifests itself.

“Rashes can be signs of other things as well, autoimmune disorders, vasculitis, as well as cancer,” he said.

It could also be a sign of something “less worrisome,” Kuruvilla notes, like a simple infection or allergy.

WATCH: These are the other breast cancer symptoms you should be aware of

Aside from a bit of pain in her joints now and then, everything is pretty much ” back to normal” for Douglas, even though her cancer hasn’t yet been completely treated.

She is “1,000 per cent determined to beat it,” though, and hopes her unusual experience can help others.

“I want to show that something as bizarre as a rash can be your body trying to show you there is something going on inside that you wouldn’t even think of.”