WATCH ABOVE: 'Will & Grace' is back

Don’t expect a monumental ground shift when Will & Grace returns after an 11-year hiatus.

The four-person comedy, starring Toronto-born Eric McCormack, Debra Messing, Sean Hayes and Megan Mullally, doesn’t plan on reinventing the wheel; instead, at least according to its main cast members, the show aims to be an escape from the grind, just as it was in the ’90s and ’00s. The funny is still there, and the show doesn’t try to squeeze itself into relevance. It just naturally happens.

It’s 2017 now, and the world is a very different place. There is a lot of political strife, and gay rights have undergone much change since the original airing of the program when Hayes (who’s gay in real life) didn’t feel comfortable coming out of the closet. It’s all out there now, and Will & Grace is easily the most anticipated reboot premiere of the fall season. So anticipated, in fact, that it’s already been renewed for a second season.

Global News caught up with the Will & Grace cast and executive producers at the Television Critics Association summer session. Here’s what they had to say about this fan-favourite returning to TV. 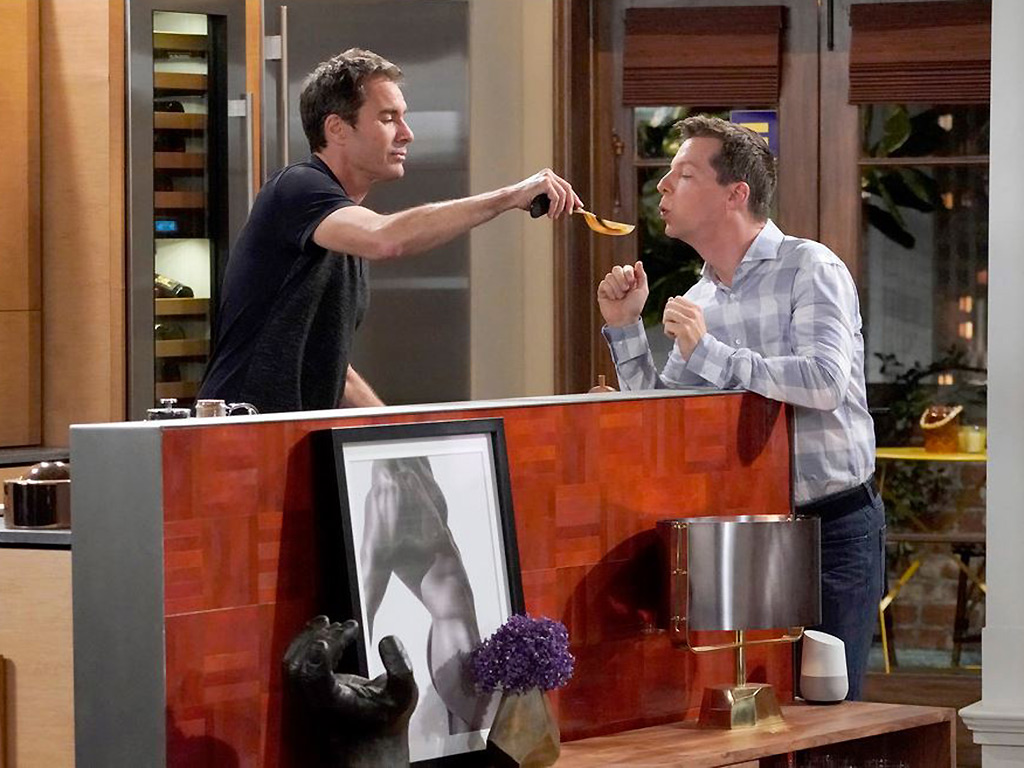 As with the upcoming Roseanne reboot, the Will & Grace restart is occurring in a universe where the original finale never happened. No children, no finite split-up of Will and Grace. In the first episode of the new season, the cast briefly addresses the previous finale, and frames it as a dream Karen (Mullally) had.

“I’m going to say that that was more or less a fantasy,” said executive producer David Kohan. “It was a projection, that last episode, into the future, and I also think that one of the things when we thought about bringing this back was, ‘What was it that we missed?’ And I think what we missed was the dynamic between the four of them more than we missed the possibility of seeing what their lives would be like as parents.”

“We never would have gone in that direction if we weren’t ending the show,” agreed executive producer Max Mutchnick. “You never find yourself in this situation. We all came together again because we were friends, and we worked on something that we believed in at that time, and Bob gave us a call and said, ‘Would you like to come back?’ So it’s at that time that you have to take a hard look at the work creatively and decide on the thing that was best about the show. What is the thing that made the show work? And that, really, was always and will always be, the lightning in the bottle that’s sitting next to me.”

“And by ‘lightning in a bottle,’ he’s referring to my vagina,” quipped Mullally. (He’s actually referring to the chemistry in the cast.)

There will be guest stars, but the focus is on the four main cast members

A big part of the original series run was the guest stars — like Alec Baldwin, Elton John and Blythe Danner, to name a few — but this time around, while some will make cameos, the focus is on the four main characters.

“I think what you’re going to see the most of will be the four of them,” confirmed Mutchnick. “Our job with starting the show out and getting it re-established is going to be about resetting the rules, because we did have this finale, and we talked about things that are not going to be on the show. So we spent the most time in story camp figuring out what would be the best way to tell the audience exactly where they’re at, and what they’re up to at this time.”

WATCH BELOW: Will & Grace takes on 2016 U.S. election in short skit

The show will still deal with LGBTQ issues

It may be 11 years later, but the LGBTQ community is still struggling for equality. It may be a different battle, but the fight for inclusion and acceptance isn’t old news. Naturally, there will also be a clash between the young gay community and the older members, who’ve experienced wide systemic and personal discrimination during their lives.

“I don’t think gay issues are dated at all,” said Hayes. “I think the fight goes on and will go on for a long time, just like a lot of other issues.”

“When we started, it was revolutionary to have two gay characters, so what we were able to address at the time was LGB,” said Messing. “We stopped at B, and my hope is that now we can finish the alphabet. With gender identity… there are so many things that are being discussed in our culture right now.”

Ultimately, the showrunners say, Will & Grace has always been about inclusion (despite what Karen may have to say).

“This show is always about inclusion,” said Mutchnick. “That’s what we started with and that’s the type of people they are. That’s the type of characters that they are, so I think when we come back, we will get to it again. But it’s just going to be about trying to make the funniest shows that we can with these characters passing through the life that you all know that is taking place out there right now.”

“That was the thing that made we want to come back,” said Messing. “It’s, like, OK, if we can be quintessential Will & Grace and do what we did before, which was, first, to make people laugh out loud and maybe make them pee a little bit on the couch, that’s #1. And #2, shine a light on what’s happening today in our culture.”

The Karen and Jack characters are exactly as you remember 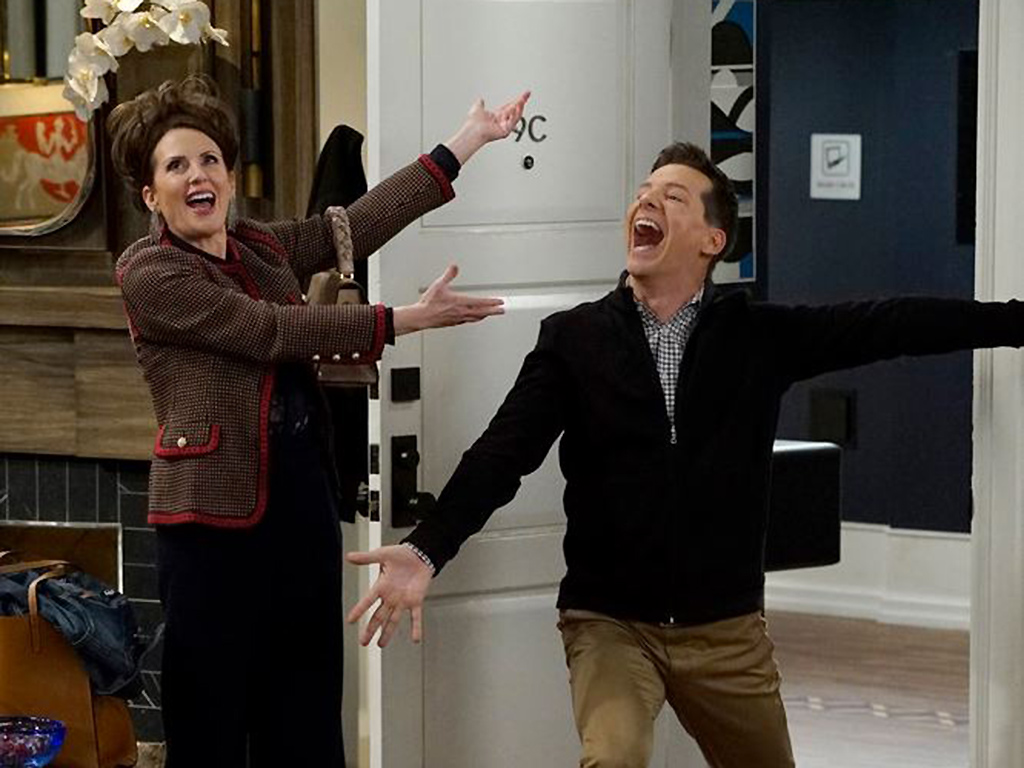 Seriousness aside, you could always count on Karen and Jack to provide the laughs. I’m happy to report that the laughs are plentiful when it comes to these two, who are essential to the show. For Mullally and Hayes, it was like stepping back into old shoes. After a little wearing in again, they fit perfectly.

“It’s cliché, but it’s like riding a bike,” said Hayes. “We’ve all become brothers and sisters and family. Anything as far as moving forward with the show, it’s so easy. Fits like a glove. It’s just a blast. It’s a gift of a lifetime to get together and do this again.”

“I think the main difference is we have to stretch before we rehearse now,” agreed Mullally. “Whereas 11 years ago it’s like, ‘F**k it. We’re fine.'”

It’s almost as if the cast and crew never left 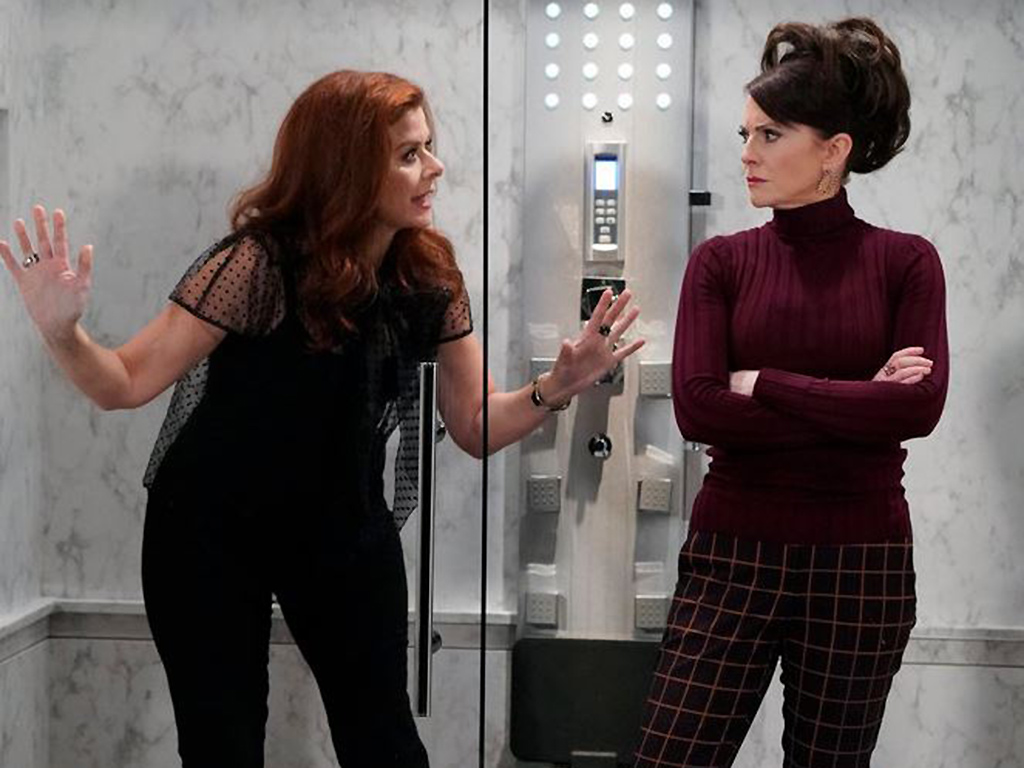 Another element that helps the show return in a seamless way is the majority of production staff is the same as during its original run. James (Jim) Burrows, the original director of the show, is back in the saddle at age 76, and he’s directing each and every one of the new episodes. Who better to helm the return than the man who’s been at the controls the whole time?

“Jimmy Burrows, our director, always says the answer is ‘je ne sais quoi,'” said Kohan. “It is. You can have a good script and good actors and something doesn’t work, and you don’t know what it is. And Jimmy always said, ‘When you have this kind of thing, you have to appreciate how fortunate it is, when it’s a confluence of these particular actors playing these particular parts with these particular words to say.’ I try not to question it. I don’t want to analyze it too much. I feel like it will take something away from it.”

The chemistry among the cast was immediate and visible at the first table read of the script.

“They hadn’t been at a table read for 11 years until yesterday, and the four of them sat down and read a script and I don’t think you guys read it before you were out there,” said Mutchnick. “And they read this thing cold, and there were a lot of us in the room that were there originally, and a lot that were new to the process. And the new ones just could not believe how instantly they become this thing.”

“It was all on the page from Day 1,” said Messing. “And when we sat down together, it came to life in a way that I had never experienced with anything else or since. And I think, because we all started out in the theatre and we grew as artists, as collaborators, it very quickly became a place that was very safe to try things and to fail. And I think funny happens when you take risks. I like to think of the four of us as… comedy as music, and each one of us is a different instrument. And when we play together, we’re at our best.”

The cast is overjoyed to be back in their roles 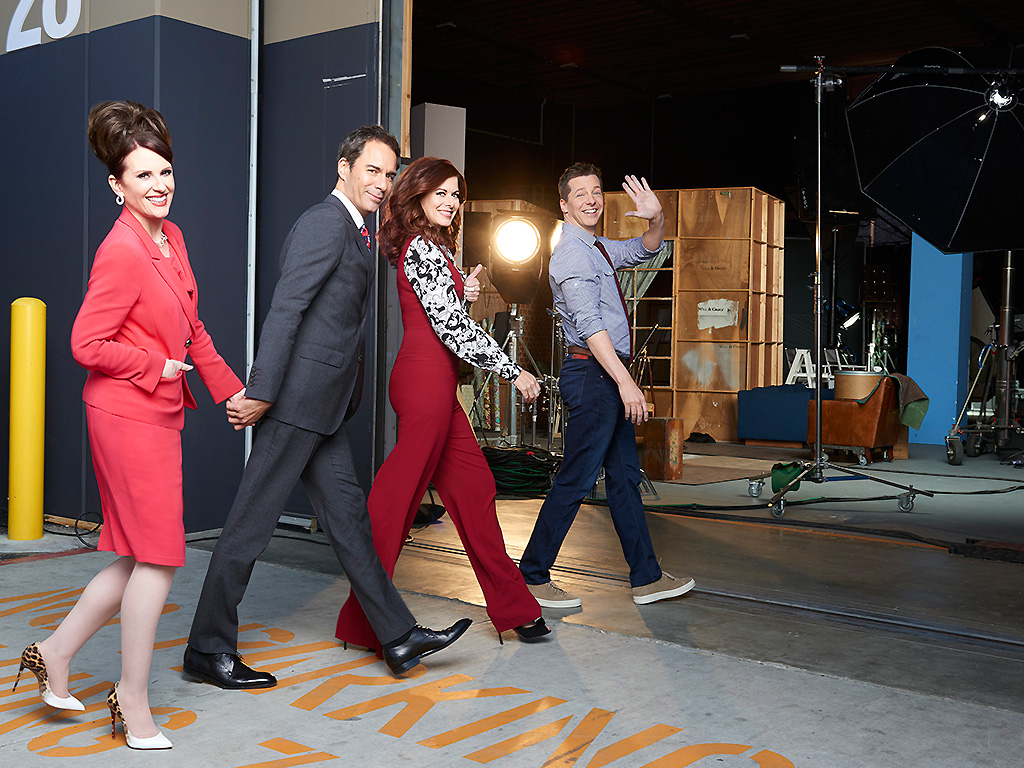 Something unique to the Will & Grace reboot is the sheer joy each of the cast members felt when they reunited to shoot the new season. It’s one thing to have on-set chemistry, but it’s a whole other thing to transfer that chemistry into something funny and endearing to an audience. For the most part, the first few episodes of Will & Grace do just that. While it’s a bit rusty out of the gate, there are plenty of laughs to be had, and it’s apparent that the cast is having a ball.

“When we all came together and read, it felt like coming home,” said Messing. “And we laughed so hard. For the last year at least, I’ll speak for myself, it’s been a confusing time, and I haven’t laughed very much. And to come back together and to laugh out loud and to be surprised by one another and to have new stories to tell and to have the opportunity to do it, it’s a no-brainer. It’s just a beautiful, crazy thing that’s happened.”

“I have to say that, for me, a big piece of it was the response we’ve had not just from fans, but from ,” agreed McCormack. “There’s been a very non-cynical, non-judgmental response, just a positive ‘glass more than half full’ response that made me think, ‘Well, then, we have a place. We’re not going to be fighting an uphill battle,’ that there’s a place for this show. And I thought, ‘Why not? Why would we not?'”

“There’s nothing scary about it at all. It’s fun. I looked forward to it,” said Hayes. When I got the call, it was a no-brainer.”

“I was laughing and crying when I was reading ,” said Mullally. “I was like, ‘Well, this is what we should be doing.'”