The lawsuit filed by a photographer against Kendall and Kylie Jenner’s fashion label over T-shirts with the late rapper Tupac Shakur’s image on them is being dropped.

A document filed in federal court Wednesday says that both parties are asking a judge to dismiss the lawsuit brought by Michael Miller against the Kendall + Kylie clothing label.

The filing says each side will pay its own legal fees but gives no details on any financial settlement.

In July, Miller alleged the sisters had used his pictures of Shakur without permission.

Miller said the sisters “misappropriated and wrongfully exploited” his work. Miller’s suit added that the Jenners “intended to exploit his photography, let alone obtain his authorization.”

The label said the images were obtained from a company licensed to sell them. The Kylie + Kendall brand had superimposed images of the Jenner sisters and the brand’s label over photos of musicians, including Shakur, Notorious B.I.G., Ozzy Osbourne, The Doors and more.

The vintage T-shirts were sold for US$125 apiece, but they were pulled after Osbourne’s wife, Sharon, and Notorious B.I.G’s mother, Voletta Wallace, spoke out.

“Girls, you haven’t earned the right to put your face with musical icons. Stick to what you know… lip gloss,” Osbourne tweeted.

Girls, you haven’t earned the right to put your face with musical icons. Stick to what you know…lip gloss. pic.twitter.com/BhmuUVrDBn

Wallace spoke out about the vintage T-shirts on June 29.

Wallace said that the product had no affiliation with The Notorious B.I.G. estate and the estate was never contacted about using “The Likeness of Biggie.”

“I am not sure who told @kyliejenner and @kendalljenner that they had the right to do this. The disrespect of these girls to not even reach out to me or anyone connected to the estate baffles me,” Wallace wrote on Instagram. “I have no idea why they feel they can exploit the deaths of 2pac and my Son Christopher to sell a t-shirt.”

“This is disrespectful, disgusting and exploitation its the worst!!!” Wallace concluded. 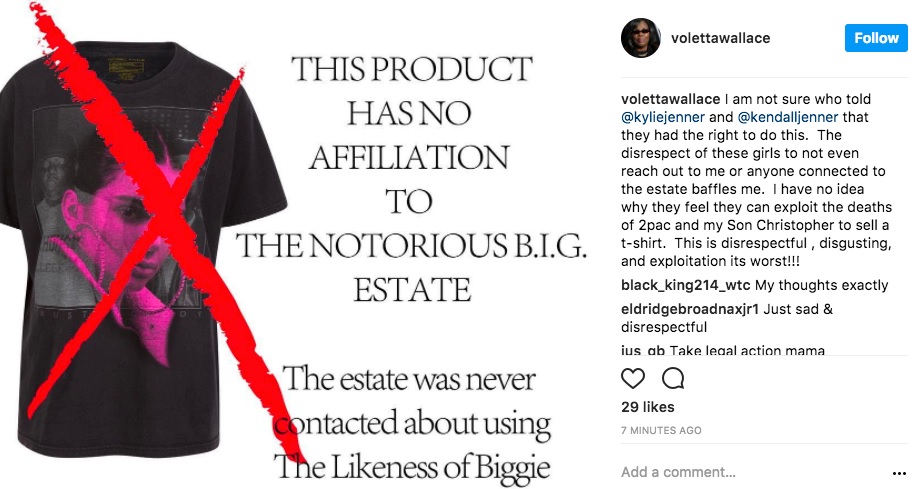 At the time, Wallace’s lawyer and the Doors both issued cease-and-desist letters to the sisters over the controversial line of T-shirts, according to Rolling Stone.

Jeff Jampol, manager of the Doors and the Jim Morrison estate, also spoke out about the pair’s decision to sell the unauthorized clothing.

“This is a case of people who fashion themselves as celebrities who are famous for being well-known but don’t actually do anything trying to utilize and steal and capitalize on the legacies of those who actually did do something and created amazing art and messages,” Jampol said. “It’s ironic, at least, and criminal, at worst, both morally, ethically and artistically.”

READ MORE: Kendall Jenner’s Pepsi commercial: Not everyone hated it

After all the backlash, the sisters issued an identical message on Twitter.

“These designs were not well thought out and we deeply apologize to anyone that has been upset and/or offended, especially to the families of the artists,” the statement read.

“We are huge fans of their music and it was not our intention to disrespect these cultural icons in anyway . The tee shirts have been pulled from retail and all images have been removed. We will use this as an opportunity to learn from these mistakes and again, we are very sorry.”

—With files from the Associated Press