Scarlett Johansson has dropped out of movie Rub & Tug following backlash over her casting in the lead role as a transgender man.

“In light of recent ethical questions raised surrounding my casting as Dante Tex Gill, I have decided to respectfully withdraw my participation in the project,” Johansson said in a statement to Out.com.

The actress continued: “Our cultural understanding of transgender people continues to advance, and I’ve learned a lot from the community since making my first statement about my casting and realize it was insensitive. I have great admiration and love for the trans community and am grateful that the conversation regarding inclusivity in Hollywood continues.”

Johansson, 33, a cisgender woman — meaning her sense of personal identity and gender corresponds with their birth sex — had been cast in the drama as Dante “Tex” Gill, a real-life person who owned a massage parlour in 1970s Pittsburgh. Gill was born a woman, but dressed like a man, had short hair and sideburns and preferred being called “Mr. Gill.”

While Gill was never officially identified as “transgender” (the term didn’t even exist then), all accounts of his life indicate that he presented outwardly and lived privately in the male gender.

Johansson spoke about the opportunity to play the character in her statement, saying, “While I would have loved the opportunity to bring Dante’s story and transition to life, I understand why many feel he should be portrayed by a transgender person, and I am thankful that this casting debate, albeit controversial, has sparked a larger conversation about diversity and representation in film.”

She added: “I believe that all artists should be considered equally and fairly. My production company, These Pictures, actively pursues projects that both entertain and push boundaries. We look forward to working with every community to bring these most poignant and important stories to audiences worldwide.”

The project was originally announced on July 2 and it was followed with immediate backlash against Johansson’s casting.

“Oh word?? So you can continue to play us but we can’t play y’all?” Trace Lysette, a transgender actress, wrote on Twitter after the casting announcement. “Hollywood is so f***ed… I wouldn’t be as upset if I was getting in the same rooms as Jennifer Lawrence and Scarlett for cis roles, but we know that’s not the case. A mess.” 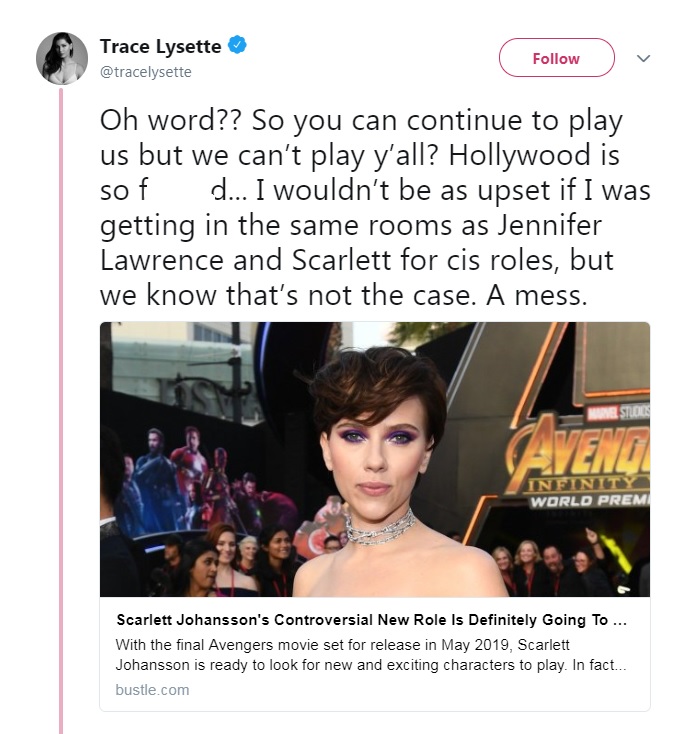 “Actors who are trans never even get to audition FOR ANYTHING OTHER THAN ROLES OF TRANS CHARACTERS,” transgender actress Jamie Clayton tweeted. “THATS THE REAL ISSUE. WE CANT EVEN GET IN THE ROOM. Cast actors WHO ARE TRANS as NON TRANS CHARACTERS. I DARE YOU.”

Actors who are trans never even get to audition FOR ANYTHING OTHER THAN ROLES OF TRANS CHARACTERS. THATS THE REAL ISSUE. WE CANT EVEN GET IN THE ROOM. Cast actors WHO ARE TRANS as NON TRANS CHARACTERS. I DARE YOU #RupertSanders @NewRegency #ScarlettJohansson https://t.co/RkrW8MeGcG

Once the news of Johansson’s decision spread, many people took to Twitter to celebrate.

You all are going to *STOP* underestimating the access and voice that social media has given to marginalized folx to challenge these kinds of things from jump street.https://t.co/WCMKt5COri

Good! Now cast a trans man. We deserve the chance to tell our own stories.

How about, we just start casting trans (honestly any LGBTQA+ in general) and poc folks in everything naturally?

And not just as tokens? Or -just- to talk about being trans/gay/poc/etc?

—With files from Chris Jancelewicz