A pilot project that bumped up the QEW’s speed limit to 110 from 100 km/h between St. Catharines and Stoney Creek will stick around until 2023, according to the Ministry of Transportation (MTO).

The province confirmed to Global News that the decision was made following a review of data between 2017 and 2021 revealing collisions in the first two years of the move were lower than the previous two years.

“During the first two years of the pilot, the number of collisions was generally found to be lower than previous years in the pilot sections,” the MTO said in an e-mailed statement.

“Given the changes in traffic patterns resulting from the COVID-19 pandemic, and to allow the ministry to collect additional data that is more representative of normal traffic conditions, the pilot at each location is being extended for two more years.” 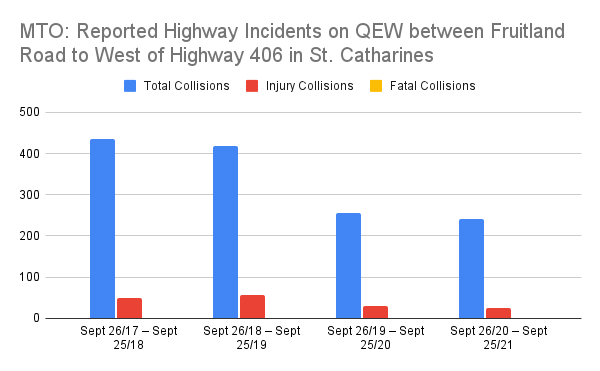 During the release of the numbers, the MTO prefaced the results by saying typically collisions are random by nature and can fluctuate year-over-year based on a variety of factors.

“Therefore, it may not be appropriate to draw conclusions based solely on any observed year-over-year increase or decrease in collisions,” the MTO said.

The agency added it’s also possible that not all collisions may have been fully reported in those periods and that the numbers could be adjusted in the years to come.

In 2019, the government outlined an effort to “improve traffic flow and safety” on three sections of highways in Southern Ontario by moving speed limits to 110 km/h.

The two other affected roadways were Highway 402 from London to Sarnia, and Highway 417 from Ottawa/Gloucester to Ontario/Quebec border.

Housing prices in Canada to keep rising through 2022 as demand outpaces supply: report

Since then, province-wide consultations on how to safely increase highway speeds to align with other provinces and modernize Ontario’s highway network have been ongoing.

Flamborough-Glanbrook MPP Donna Skelly, at a news conference in 2019, said the Hamilton-St Catherines run was an important change since it’s a major trucking and business route connecting the GTA and four U.S. border crossings in Niagara Falls.

“It’s a very straight piece of highway. It comes off of a bridge and ends before we get into another bridge. So it’s really testing on a safe piece of highway,” Skelly said.

The MTO says no decision has been made on any additional pilot locations with other southern Ontario roadways.