The Hamilton Tiger-Cats are in Montreal Friday night to tangle with the Alouettes in what is, for both CFL clubs, the biggest game of their season.

Entering the game at Percival Molson Stadium on the campus of McGill university, the Ticats will be looking to boost their 4-9 record while the Alouettes (5-7) are hoping to put Hamilton farther back in the rear-view mirror.

900 CHML radio’s coverage begins with the Pregame Show at 6:30 p.m. Kickoff is at 7:30pm. A half-hour after the final whistle, catch The 5th Quarter post-game show on CHML and 900chml.com.

A victory would vault the Cats into a tie with Montreal for second place in the East Division and clinch the season series, while a win by the Alouettes would push them four points clear of Hamilton while still retaining a game in hand.

While the Al’s are coming off a bye week the Tiger-Cats are fresh off their most impressive outing of the 2022 season after dominating defending champion Winnipeg 48-31 last Saturday.

Ticats QB Dane Evans was named a CFL top performer after throwing for 327 yards and a career high five touchdowns in the victory, which stopped Hamilton’s three-game losing skid.

“They biggest thing that they bring is they bring energy,” said Evans. “Whatever they’re doing they are coming with 100 per cent.”

Evans called Montreal’s defensive line “one of the best in the league” and heaped praise on the Alouettes linebacking corps and defensive backs.

The Ticats will be without defensive lineman Dylan Wynne due to a knee injury while safety Tunde Adeleke will be a game time decision as he battles a knee injury as well as Hamilton searches for its first win on the road. 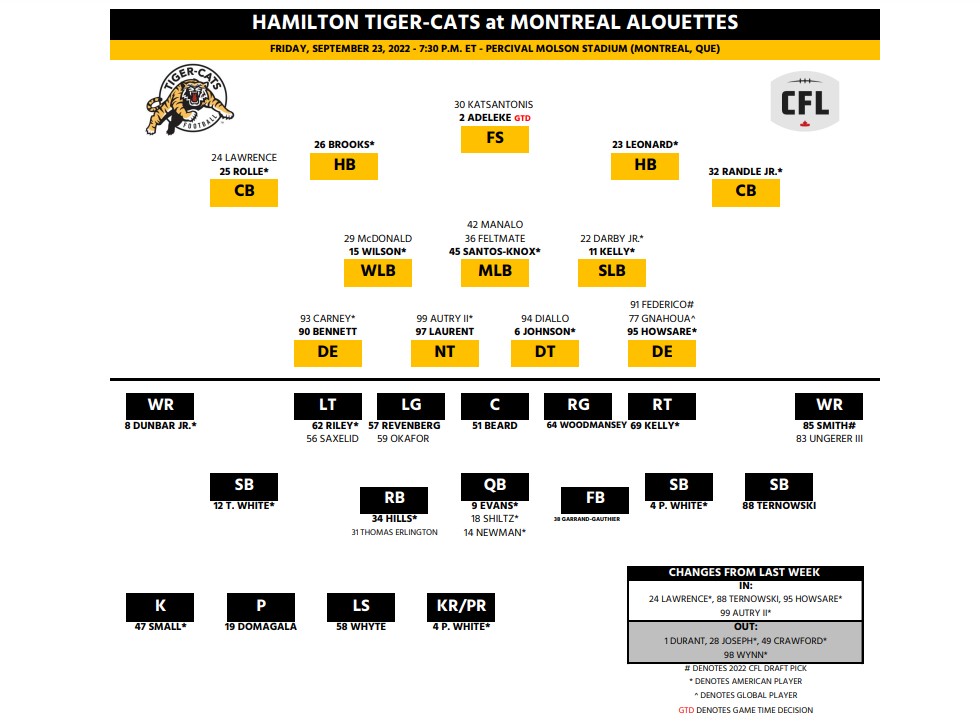